I like to read, write and talk about writing.
343 BOOKS

Enemies of the People: My Family's Journey to America 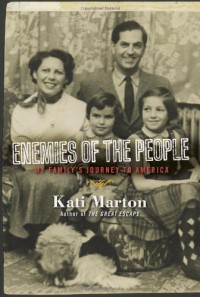 Reading some of the comments on the three-starred and fewer-starred reviews here is surprising. One claim is that it is badly written. In what universe? I can agree there is perhaps a bit of dryness, but that's it. The story's substance more than makes up for this.

Another criticism, that Marton is repetitive. Not so much, actually. What Marton does is periodically reflect on her parents given the new info she has learned.

At least one person seemed surprised it was a memoir. Another wanted more info about life in Communist Hungary. Exactly how much info can one book (that's not a textbook) give? This book gives a detailed account of one family's, and many individual persons', lives in Hungary. This is not a census in narrative form.

Meanwhile, no one has seemed to understand the point of how very complicated all the persons in the book were. Secret Police harassing the parents and the parents later giving shelter to one of those very secret police, for example. U.S. diplomats who befriended the Martons and kept in mind, nonetheless, the idea that they might be spies for Hungary. The status of the Martons in the U.S. It wasn't an all-encompassing embrace by their new country: both the FBI and Hungary's Secret Police spied on them for years. These are complexities that shed light on what it means to be a person who does more than go to work and shop for groceries and watch soccer or football games. We can learn from it, but instead we're writing these limited reviews and comments. Some of the most important stuff here has flown over the heads of a great many - if not most - of the people who say they've read the book.

Of course, there are problems. As a reader, I felt Marton frustratingly gives a pass to her father on his treatment of his wife. But, hey, he's her father; she has a right to her viewpoint; and, I don't know everything about their family relationships. So, it's a point of gossip rather than a way to evaluate the book. One commenter felt Marton hasn't worked out her issues with her parents. So she shouldn't write a book? We're readers, not Marton's therapists.

Secondly, there were two or three translations that were inaccurate, which is curious since she is a native speaker. Thirdly, Marton does not use diacritical marks on her many Hungarian words and names. This is unfortunate and, to a Hungarian speaker, very obviously missing. If the book is going to exhibit the language, particularly one that so few speak, it should accurately depict it. It's puzzling why Marton failed to do this.

Overall, I found this book absorbing and a valuable insight on this bit of history and on human nature.